Soaking up the Sun

We have a surplus of sunny skies here in the Caribbean. This simple fact has long captured the imagination of architects, environmentalists and property owners and led us to the dream of powering our homes, schools and places of work with solar energy. This dream has been variously thwarted by economic, aesthetic, functional, and legislative challenges. Proponents of solar power continue to work on all these fronts, but from an architect’s point of view, solar has come a long way.

Solar power systems have traditionally consisted of roof-mounted panel units, angled to achieve maximum insolation and efficiency, and with obstructions carefully removed. Many consider solar panels to be ugly protrusions, and fastener penetrations through roof cladding have the potential to cause leaks. The advent of Building Integrated Photovoltaics promises to make solar installations more cost-effective and blend them seamlessly into the overall aesthetic of the home or commercial building. 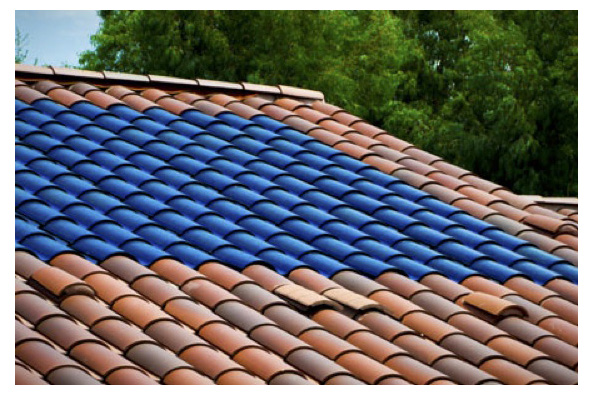 The term photovoltaic refers to what are typically called solar cells. These are the units which absorb the energy of light and emit it as direct electrical current. A solar power generating system adds an inverter to convert the direct current to the alternating current used in modern electrical systems and battery packs are often used to store excess power. Building Integrated Photovoltaics (BIPV) take an architectural approach to solar power production, turning the building itself into a power plant. BIPV products include roofing tile and shingles, standing seam metal roofing, and photovoltaic laminated safety glass. Because the solar technology is integrated into building components that would normally be installed by standard tradesmen, most BIPV technologies don’t require specialty installers, and installation costs are largely eliminated. There is minimal additional work for the electrician and almost none for the contractor.

Solar Standing Seam Roofing
Thin photovoltaic films which can be installed on metal panel roofing have been available for some time. However, a number of companies have now developed standing-seam panels which are sold with the PV film already laminated onto the panel and pre-wired for easy connection to an inverter. One example is the FusionSolar™ system by Custom-Bilt Metals.

Solar Shingle
Solar shingle technology integrates low-cost, thin-film photovoltaic cells into a proprietary roofing shingle design. This allows the solar roofing shingles to be installed simultaneously with conventional roofing shingles by contractors with no specialized skills. Major companies include Dow Chemical, UniSolar (partnered with CertainTeed Roofing), and Atlantis Power who confirm that their SunSlates system is tested to hurricane-force winds.

Photovoltaic Laminated Safety Glass
While most architectural solar on residential projects is still roof-related, an exciting option is photovoltaic glass. Photovoltaic (PV) glass is Laminated Safety Glass with solar cells in the interlayer between the two sheets of glass. This glass can be used in windows, skylights, shade structures, railings, and in almost any architectural application where glass is employed. The specially engineered photovoltaic properties allow this glass to generate electricity even where the orientation and inclination are not at optimum. It also allows for practically clear and even colored PV glass. In the Caribbean over the last decade, it has become the norm to use laminated safety glass in windows for hurricane protection. Therefore, the up-charge to go with PV glass is less than it would be elsewhere. However, using PV glass for the veranda roof is undoubtedly a luxury application.

Newer photovoltaic systems are not as dependent on perfect alignment and clear skies for optimum production. The technology now allows for efficient electricity generation on vertical facades and flat roofs.

Back-up versus Primary Power
In the BVI, the law allows the production of up to 25kW of power where no public supply is available without special permission. In practice this also applies to back-up power production when the mains supply is down. Although heavy use of air-conditioning can push power consumption up to 40kWh per day, the average home will typically use around 15kWh of energy per day. Consequently most solar installations in the BVI are “back-up generator” installations with battery packs which store the power for use at night. While these do get frequent use here, they’re not as cost-effective as they could be if primary power and/ or grid-tie solar systems were allowed.

Grid-tie solar systems allow surplus power from your solar array to flow into the electric utility system by day, allowing the meter to run backwards when you generate a surplus. Where the utility company allows net-metering, it can save you money or even zero-out your electricity bills, while contributing power to the public electrical system. Grid-tie solar systems are not addressed by current BVI legislation and are not allowed since Electricity Corporation staff are not trained to work with live power lines. The latter can be addressed by the use of auto shut-off switches that prevent your solar array from feeding power into the utility grid when the supply is interrupted.

There are also currently no incentives or rebate programs for the use of solar power in the BVI. The most cost-effective solar power system is a grid-tie, primary power system with battery back-up for when the public power goes out at night. However back-up power solar systems do pay for themselves over the life of the building if the system is carefully planned, sized, and integrated into the structure.

The option of an architectural approach to solar power production, using Building Integrated Photovoltaics, promises to make solar power generation more practical, affordable and aesthetically pleasing. In fact, some installations have a dramatic beauty that cannot be denied. Integrating photovoltaic technology into building components that have to be installed anyway makes the technology more accessible and bodes well for the future of energy efficient and sustainable design. We do have a surplus of clear sunny skies here in the Caribbean. Hopefully soon we can use them to our full advantage.